The ICAC will be holding a four Twitter contests to celebrate World Cotton Day, with each awarding the winner $1,000 and the runner-up $500.

Winners will be those who get the most points (1 point for each like and 3 points for each retweet) for tweets sent between 1 September and 6 October, with the winners announced on World Cotton Day.

Each tweet must include three hashtags — #worldcottonday; #ICAC_Cotton; #cottonforgood (the official theme of World Cotton Day) — as well as a fourth that indicates which contest the tweet is for: 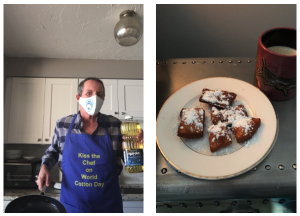 ICAC employees are not eligible to win any of these contests, but if they were, he would have posted the image on Twitter like this: 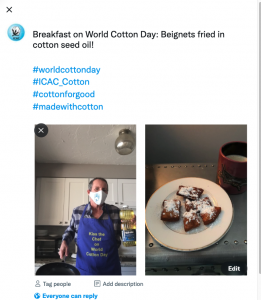 As you can see, there is an explanation of the image at the top, then there are the three mandatory hashtags that every entry must include, as well as a fourth hashtag indicating which contest the tweet is for (#madewithcotton).

Other things to know:

There is no limit to the number of tweets a person can send, but only those sent between 1 September and 6 October will be eligible for the prize money. The more tweets you send, the better your chances are!

Winners will be announced on 7 October, at which time arrangements will be made to deliver the prize money.

Good luck and get those fingers typing to help the world’s most important natural fibre on World Cotton Day!

The 7th World Cotton Research Conference (WCRC7) will be held in Cairo from 4-7 October 2022. With the event concluding on World Cotton Day, the ICAC will present prizes to the top two live presenters during the event and the top two research posters as well.

Rules and judging details will be coming soon. Winners will be announced on the afternoon of 7 October and arrangements to deliver the prize money will be made at that time.